Surface tension has really made me crazy!

Surface tension occurs at the interface of air & water. It is a force per unit length tangential to the intersurface.

But what actually causes it?

One explanation is that there are very less no. of molecules on the interface, remaining far away from each other. Due to this, greater attractive force does exist which causes surface tension. Now, the question is why the density is low.

Another explanation that my book also vaguely offers is the asymmetric downward force on the water interface. But question evidently arise, if the force is downward, how can it produce a tangential surface tension??

Now, what should be the answer to these mind-chocking questions? And are these explanations linked with each other( which I greatly believe)??

To simplify, let's consider a weightless blob of water in the Space Station, not touching anything 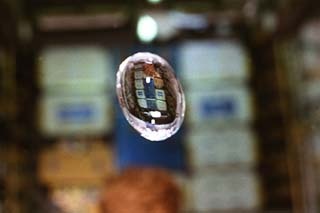 The water molecules all attract one another.

Inside the water blob, they can approach freely and then move away, attracted by others.

They move around inside the droplet.

You will understand that this surface is not fixed like a skin. The molecules that happen to be there, are all trying to get back inside, and some will, so being replaced by an "unfortunate" molecule being pushed outwards.

For a given molecule, the force pulling inwards concerns only its competition with others to get inside. It's the (tangential) attraction by surface neighbours that makes the whole surface behave instantaneously like an elastic skin, trying to diminish as much as possible and so make the blob spherical.

People with more than 50 points, might ask you to search first in the Wikipedia (http://en.wikipedia.org/wiki/Surface_tension) for that kind of question.